Most of Britain’s ghost towns were abandoned after a previous pandemic – the Black Death – wiped out entire populations from hundreds of villages. The greatest losses were in Norfolk and Suffolk, often the landing points for plague-infested ships.

Coastal erosion also contributed to settlements in these counties disappearing into the sea. The most famous, Dunwich, was a thriving port, equivalent in size to 14th-century London, before the sea swallowed it and its eight churches, earning Dunwich the name England’s Atlantis. While the majority of British “ghost villages” have all but disappeared, a few still offer rewards – and warnings – for the curious.

At the outbreak of the second world war, the Ministry of Defence commandeered several villages for target practice and manoeuvres. Imber, in Wiltshire, is still used for this purpose. On Open Days, visitors can wander deserted streets lined with skeletal houses, a Norman church and a bullet-riddled pub (Imber hopes to be open for August bank holiday this year). 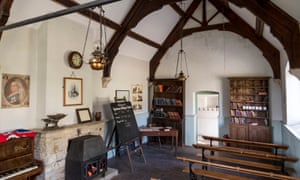 Equally eerie is Tyneham in Dorset (currently closed, but usually open most weekends). Six days before Christmas in 1943, it was requisitioned for D-day landings practice by order of Winston Churchill. On the day they left, residents pinned a note to the church door: “We have given up our homes where many of us lived for generations, to help win the war … We shall return one day and thank you for treating the village kindly.”

Churchill’s promise of a postwar return was never kept. In the schoolroom, pupils’ nature books remain open from their final lesson: a study of corvids, archetypal harbingers of doom.

A hundred miles east, Balsdean, in the South Downs near Brighton, was once a hamlet with manor house, church and “lunatic asylum” but suffered the same fate as Imber: its only remains are desolate farm buildings. In 2012, musical duo Grasscut released an album called 1 inch: ½ mile, complete with a map and walk around Balsdean. But be wary: Balsdean is a cold, strange place. Local folk singer Shirley Collins is not alone in having seen spectral figures here.

Abandoned or drowned villages are bound to attract ghost stories. The bells of Dunwich are said to peal below the water at midnight, while children’s voices ring in empty village buildings. Our politicians would do well to heed such warnings: after a crisis, it seems the ghosts of land and water never forget a promise.