I’ve always been drawn to islands. As a child, most of the games I played were on a castaway theme, and I listened to Desert Island Discs on the radio at my grandparents’ house with envy and a degree of scorn for some of the guests’ “luxury items”. At seven, I’d already decided what my luxury would be: a case of specially designed knives for gutting, skinning and filleting. I was a literal-minded child and assumed that all the guests on the show would actually be stranded. 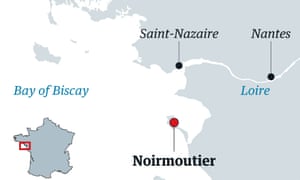 I also assumed that the island would be some version of the one on which my grandfather had a holiday home, and where I spent all my holidays until his death in 1988. This was Noirmoutier, in the Vendée region of France: it’s a flat and sandy island 20km long and 7km at its widest point, connected to the mainland by a cobbled causeway, Le Passage du Gois, accessible only at low tide.

It was, and still is, my happy place, to which I return again and again (if only in my imagination at this time of lockdown). After the death of my grandfather, I went there with my family throughout my daughter’s childhood, visiting my favourite haunts, creating a new set of memories.

My grandfather’s house was an abandoned fisherman’s cottage, rebuilt and furnished to a basic level and, at the time, standing almost alone by a deserted expanse of beach. To me, its charm lay in its simplicity: its whitewashed walls, its concrete floors, its lack of proper plumbing. The toilet was at the back of the house in a little wooden shack; until I was in my teens, we used the well for water. At the back was a stand of fig trees, which I liked to climb, eating the figs straight from the tree. At night, the stars were incredibly clear – for years there were no streetlamps on that part of the island – and I would often creep outside to lie on the beach and watch for shooting stars, and listen to the sound of the waves, and smell the scent of the salt flats and the mimosa that grew wild in the dunes.

I only know the first time I went there from my mother’s photo album. I was two weeks old, and that summer, which was especially hot, I had to be watered hourly with Evian as I lay in the shade of the fig trees. But maybe the island got to me then, because growing up in South Yorkshire I always thought of it as home: when I arrived in the summer for the school holidays, it was always with the feeling that I was finally where I belonged.

Some of this, I think, was because the island was – and remains – a safe place. Here even my mother, who was usually rather an anxious parent, was happy for me to wander as far as I liked – along the beaches, across the dunes, into the forests of sea pines, or across the sand at low tide in search of clams and razor shells. I would sometimes borrow my grandmother’s bike – a huge, ancient thing with virtually no brakes – and cycle into the town of Noirmoutier, to visit the markets and 12th-century castle with its collection of armaments, or ride the narrow pathways between the salt marshes that still make up much of the island’s economy. 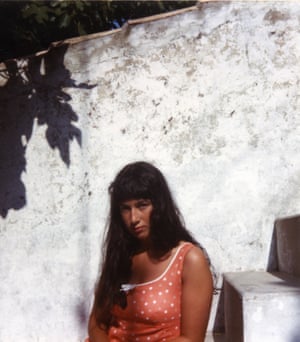 My grandfather had a fishing boat, and I would often go sailing with him or, later, on my own. There was a fallen second world war aircraft on the sandy sea bottom a couple of kilometres from the shore, and I would try to dive down and look for souvenirs among the curtains of seaweed that clung to the wreckage. No one paid much attention to what I did on the island: by definition, I couldn’t go far, and although there was no beach supervision, I was a good enough swimmer to allay my mother’s anxieties.

As a result, I grew up feeling as if the whole of the island belonged to me. And, yes, I did have a hunting knife, a gift from my grandfather to celebrate my seventh birthday on the island, which I proudly wore in a sheath on my belt and used to open shells. This, too, was perfectly normal in that alternative reality, as was the fact that for six or seven weeks at a time I stopped wearing shoes, and walked barefoot until the soles of my feet became hard and invulnerable.

There were no bath or shower facilities at my grandfather’s house, but I swam every day in the sea, and took bucket showers in the yard. We cooked outside on the barbecue: mackerel or spiced merguez, eaten with ripe tomatoes, or beans, or new potatoes grown at the little farm just around the corner. 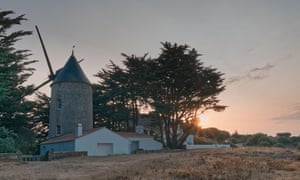 My particular territory was the long, pale stretch of sand between my grandfather’s house at La Guérinière and the beach at Barbâtre, with its clump of concrete pillboxes left by the Germans after the war. This was a distance of seven or eight kilometres which led me past various familiar landmarks – three disused windmills; a variety of dykes, groynes and other sea defences (Noirmoutier has always been at the mercy of the tides); an ancient ring of rocks that might once have been a manmade tide pool. The pillboxes marked the place where I needed to turn back and walk home, and besides, they were haunted, tumbling further on to the sand with every year that went by.

On special occasions we would all get into my grandfather’s car and drive to the north-east side of the island, to Bois de la Chaise, with its grand old villas, lighthouse and beaches ringed with rocks. This was the genteel side of the island – historically the property of a few very wealthy families. The tourist beach there is the elegant and gracious Plage des Dames, but I preferred the smaller, less accessible L’Anse Rouge to the north, where I knew every rock, every pool, every path through the woods as well as I knew my front door. 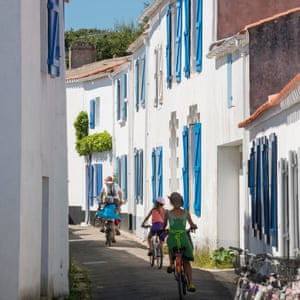 With some exceptions – Noirmoutier, the marina at l’Herbaudière, and the Plage des Dames, with its fine restaurants and bars – there were few tourist places. Most of the islanders we knew were elderly people, born there, who never went to the mainland. I sometimes played with the children of tourists who came to the island, but I never thought of myself as a tourist. Because they were pale and I was brown, most people assumed I was an islander.

Most of my happiest memories of childhood are of the island: the peppery scent of the sand dunes; the glow worms at night under the fig trees; the strong scent of the rising tide and the seaweed on the beach; the seemingly perpetual sunshine. Because of its position in the Gulf Stream, Noirmoutier has a microclimate that makes it significantly warmer than the mainland. That’s why my grandfather had bought the house: when my aunt Claudine was a child, she nearly died of pneumonia, and the doctor advised a change of climate – the Côte d’Azur, which was unaffordable, or the then-almost-unknown island of Noirmoutier. He bought the house and rebuilt it in the hope that he might one day retire there; instead it became a holiday home for all our extended family. Even now, over 30 years after his death, I still think of the island with nostalgia and affection, although the house is gone and the place has changed considerably.

The bridge connecting Noirmoutier to the mainland has made it a tourist destination, with a multitude of new holiday homes. These are rather more modern than my grandfather’s cottage, but they all have the same whitewashed walls and red-tile roofs, and gardens filled with hollyhocks and passionflower, mimosa and tamarisks, Russian vines and fig trees. The roads are asphalt, rather than just sandy tracks, and tourism has brought a multitude of mainland conveniences and attractions. 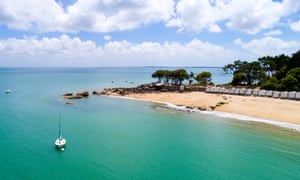 But the charm and spirit of the place remain; and so do the salt marshes, home to countless birds, and the forests of sea pines, and the long stretches of sandy beach below the belt of grassy dune. The pillboxes have tumbled even further down the beach, like something from Planet of the Apes. When my daughter was young, she used to climb to the top of the largest one and pretend it was a fort. And the beach at L’Anse Rouge is still the same, with the rocks she and I both climbed as children. Maybe some day she will introduce the place to the next generation. I do hope so… Meanwhile, it remains my happy place, not lost in the past, but anchored there – just as the island itself is linked by the bridge – by some of my fondest memories.